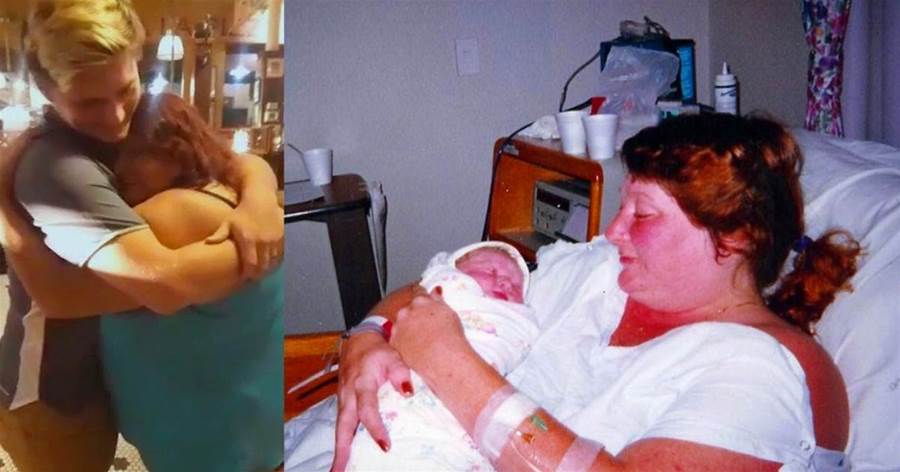 Tammy Oswalt received the birthday gift of a lifetime when she laid eyes on the son she'd given up for adoption 18 years ago.

The Florida mom surrendered her  newborn son when she was on the brink of homelessness and raising two daughters as a single mother. She said her son's father had battled addiction and they broke up before she found out she was pregnant.

Oswalt said she wanted her son, whom she named Bruce, to have a life she knew she couldn't give him. When she handed her son, whose name is now Dylan Rich, to his adoptive mother, she thought she'd never see him again.

"A mom doesn't give up her child like a sack of potatoes," Oswalt told InsideEdition.com "All I could give him was love and sometimes that's not enough. I had to make the decision to give him up because I did love him."

She received a few updates after the adoption, but said she battled severe depression as a result of her decision.

"I tried to commit suicide," Oswalt said "The emotional guilt and loss overwhelmed me."

Eventually, Oswalt said she was able to pull herself together, but the void left by giving away her son  never faded.

So when her birthday rolled around in September, her daughter, Sammy Hewett, gave her a gift that money couldn't buy: Her son.

Hewett had been in touch Dylan after he'd found his biological sister's telephone number through the internet and texted her last October. The two secretly communicated for months, but Dylan wasn't yet ready to meet his mother.

Eventually Hewett told her mother she'd been in contact with Dylan.

Oswalt said she was shocked.

"All these questions were running through my head," Oswalt said.

The mom was eventually able to talk to Dylan on the phone in August, but didn't push a meeting. She was just happy to talk to him.

Four days after Oswalt's September birthday, Hewett invited her mom to a birthday dinner, but when she pulled out a camera, the mother knew something was up.

Dylan and Oswalt live 90 minutes from each other and plan on visiting and building a relationship. She will be going to watch him in a soccer game soon.

"I feel so complete now," Oswalt said. "Everything I ever wanted, I now have. I've got what matters and that's family."