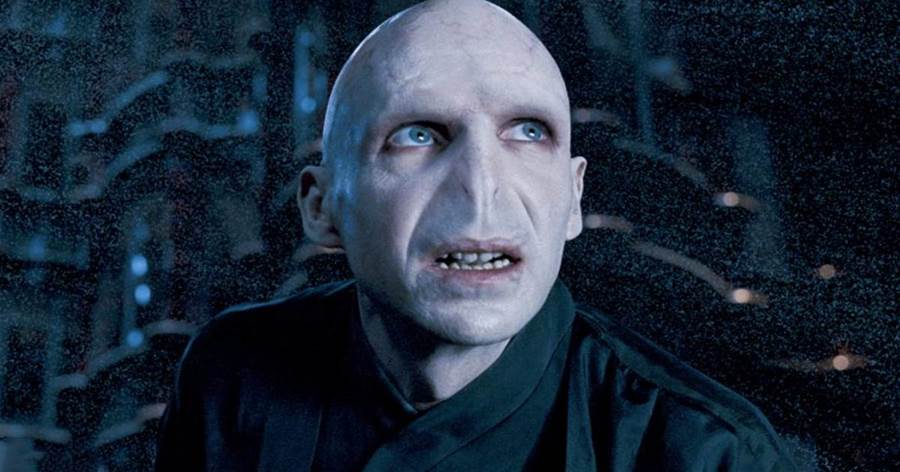 Voldermort, the most dangerous dark wizard in more than a century if not ever, needs very little introduction. He's the main villain in the Harry Potter movies and books who turns up at the end of almost every school year to terrorise Harry and his mates. When we're first introduced to Voldemort he's thought to be dead, defeated by Harry when he was just a baby and the Wizarding World has convinced itself he'll never return.

Little do they know that Voldemort planned for his own demise and created several Horcruxes that allowed him to live on as something described as less than a ghost. Through his own sheer willpower and the help of a desperate servant Voldemort manages to return to life properly and begin his plans to take over the Wizarding World.

Through the course of the eight mainline fantasy movies, we learn a lot about Harry's noseless, nefarious, nemesis but there's a lot more to this dark lord than what we see in the films. So here are a few pieces of forbidden lore that 'He Who Must Not Be Named' wouldn't want you to know about him.

Every Harry Potter fan worth his salt knows that Voldemort created Horcruxes to make himself immortal. What they might not know is how early Voldemort got started with this plan.

He was just 16-years-old when he used the death of Moaning Myrtle to split his own soul and hide it in his diary. 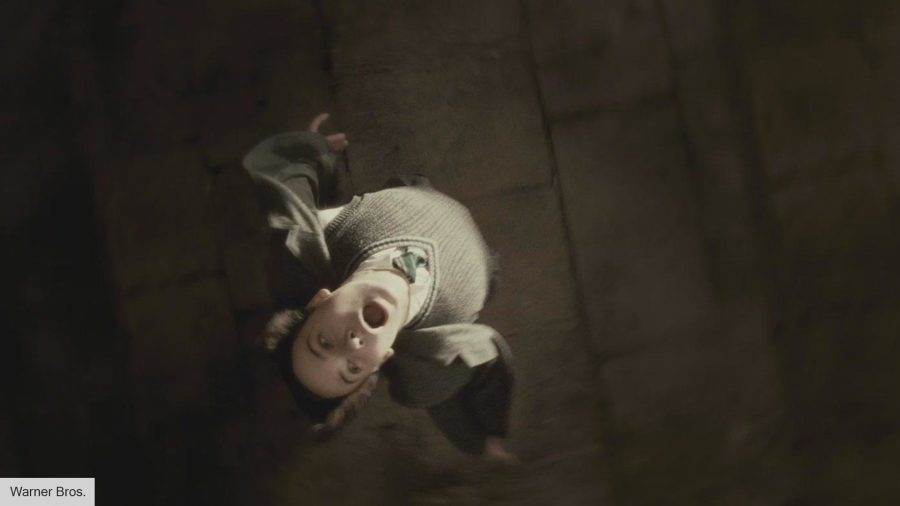 While telling Harry about the Horcruxes, Dumbledore says he suspects Voldemort reserved the murders of special enemies to create Horcruxes. He was wrong.

According to Pottermore, Voldemort made the Slytherin's locket into a Horcrux after murdering a "muggle tramp". He must have been in a rush that day? 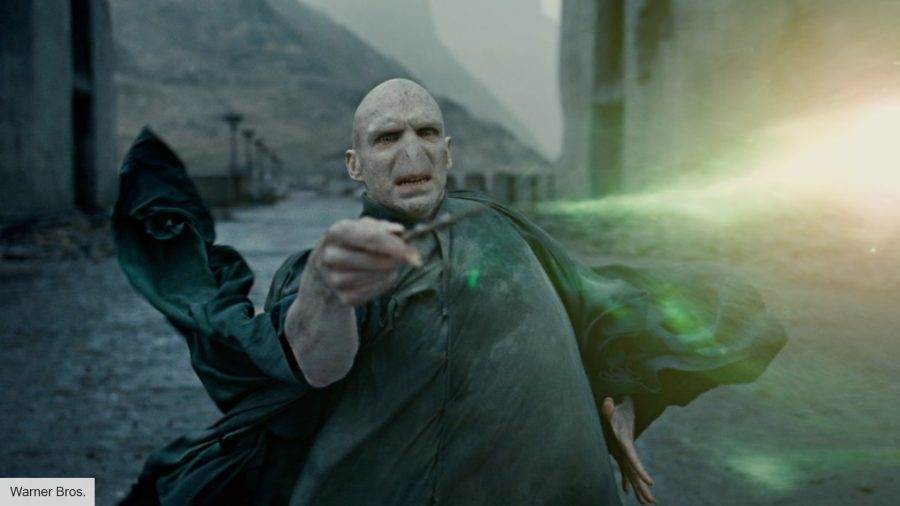 There's debate in the Harry Potter fandom over which of these two terrible dark lords would win in a duel. While they do meet in the books and Voldemort kills Grindelwald, they never have a proper wizard duel. 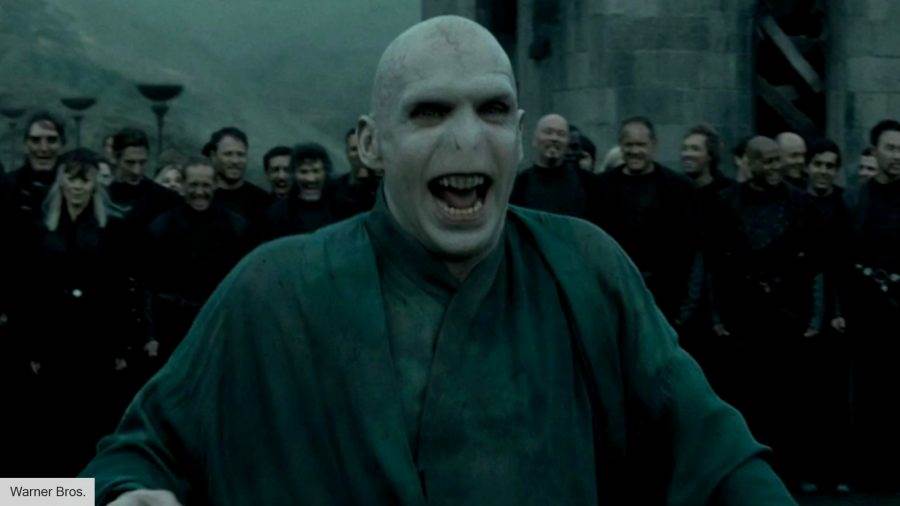 We see throughout the films that numerous eldritch experiments Voldemort conducted on himself gave him a host of weird and wonderful powers. 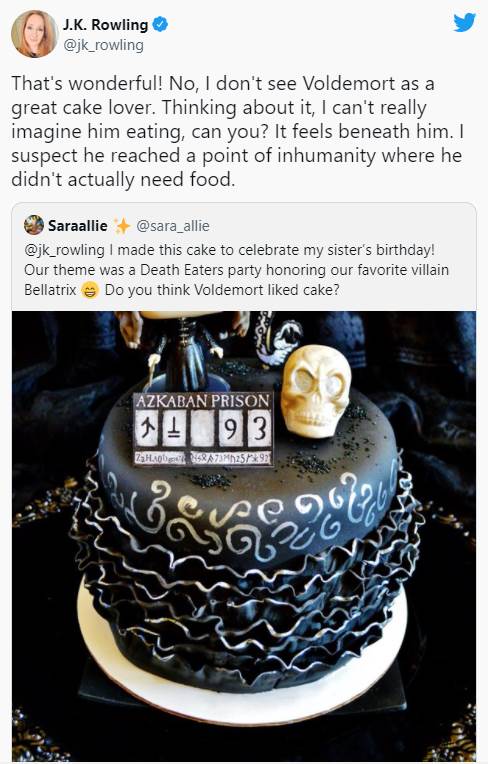 In fact, Rowling has claimed that he was so far removed from humanity that he no longer had to eat to sustain himself. 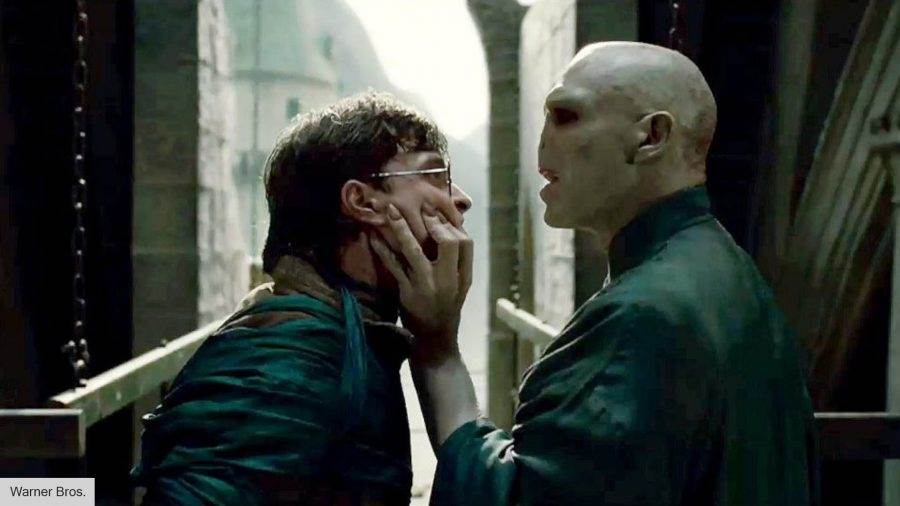 THE 'T' IS SILENT

Unfortunately for Rowling, she was a bit inconsistent with this rule so when the film version came out, all the actors pronounced it with a hard 'T' sound and the wrong pronunciation entered the pop culture vernacular. 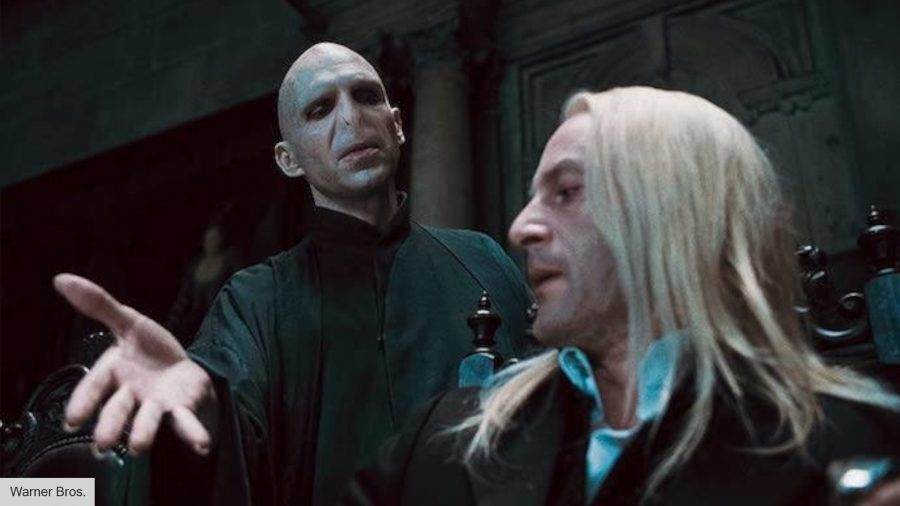 After Voldemort died, work went into demystifying the former dark lord. A book called Marvolo: The Truth was printed which explained Voldemort was really Tom Marvolo Riddle and deconstructed the myth 'He Who Must Not Be Named' had built around himself. 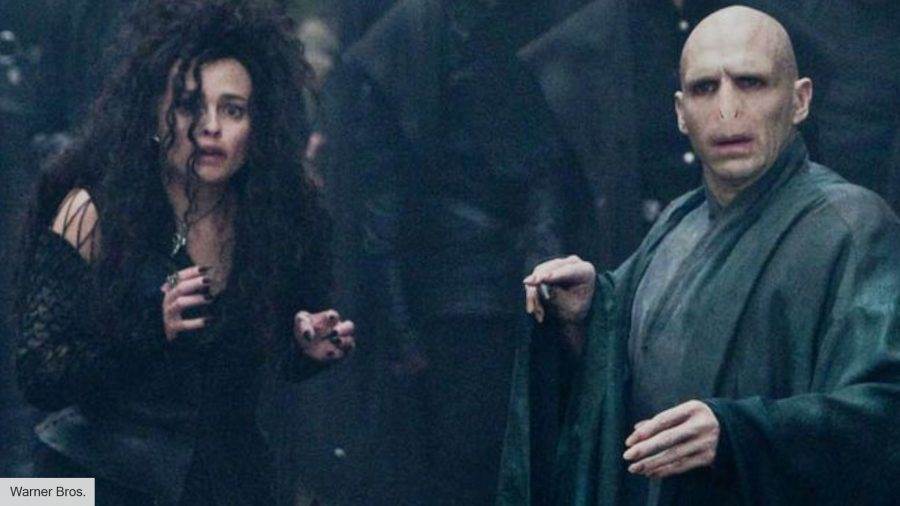 Voldemort was in fact a father, although a lot of fans don't like to admit it, as revealed in the stage show The Cursed Child which is canon to Harry Potter. Specifically, Voldemort has a daughter named Delphine, who he conceived with Bellatrix Lestrange.

We're not quite sure why an omnicidal fascist who believed himself immortal would want a child, but apparently, he did. During the play, Harry refers to Delphine as "The Ultimate Horcrux", so it's possible that Voldemort saw her continuing his lineage as a softer form of immortality?

Shockingly considering his inability to love, we see via some time travel shenanigans that had he triumphed over Harry in the Second Wizarding War he would have made her his most trusted lieutenant giving her a place in his Ministry of Magic. I guess he could love someone after all. 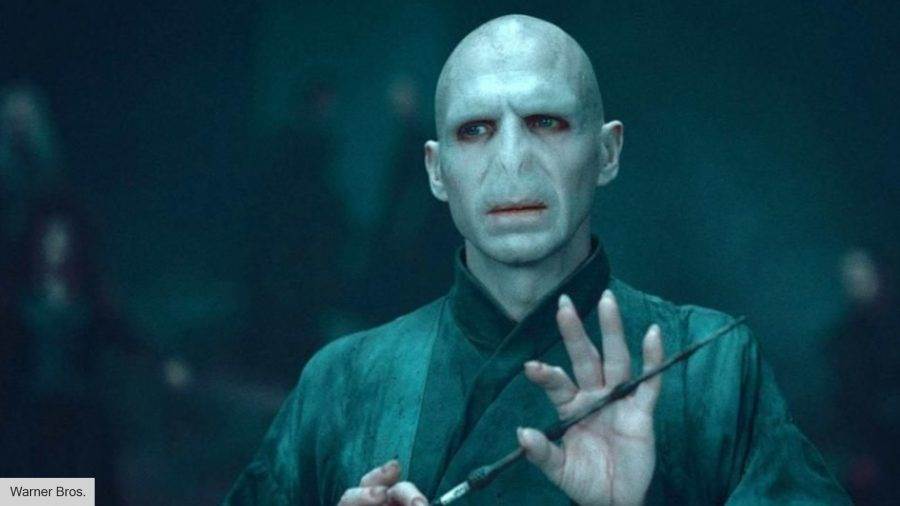 One of the biggest questions surrounding Voldemort is, 'what happened to his nose?' Infuriatingly there's no straight answer to this question, and there's some debate in the Harry Potter fandom as to when he lost his nose.

Some believe he only lost his nose after his resurrection in The Goblet of Fire and that his new body is some sort of mashup of snake and man. It's a cool theory, but it falls apart like a cheap wand when you stop and think about it.

None of the Death Eaters stop and question who Voldemort is, so he presumably looks the same as he did when they last saw him. Similarly, we don't know specifically what caused him to lose his nose, whether it was his experiments with Horcruxes or some other foul ritual, all we have to go on for his hideous transformation is a line in The Half-Blood Prince.

During a trip into the Pensieve, Harry sees a younger Voldemort trying to apply for a teaching job at Hogwarts. Harry notes that Riddle's one handsome features looked "burned and blurred; they were waxy and oddly distorted, and the whites of his eyes now had a permanently bloody look".

As Voldemort himself explains, he "pushed the boundaries of magic further, perhaps, than they have ever been pushed", so we can safely guess it was his immersion in the dark arts that made him look like a monster. 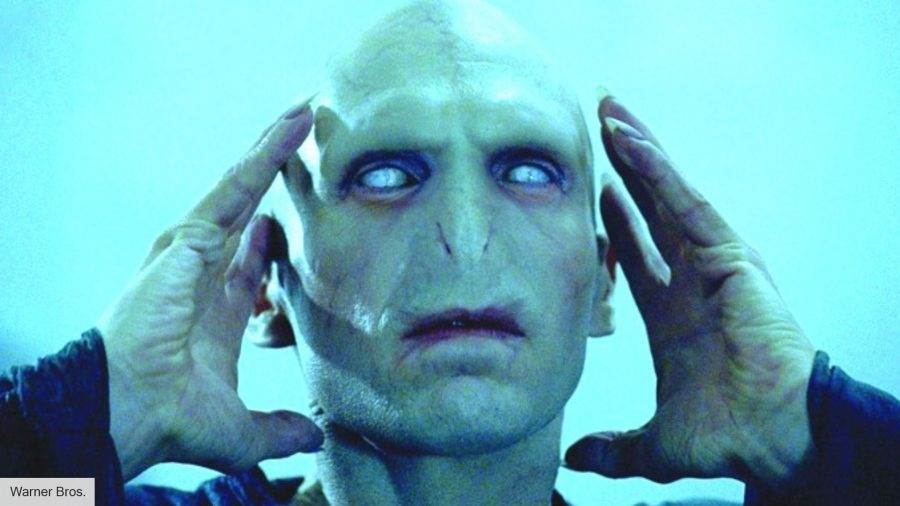 EYE OF THE BEHOLDER

Several times in the books, Voldemort is described as having snake-like red eyes. In the film's however, the dark lord has human-looking light blue eyes.

This was reportedly done so we could see the emotion in Ralph Fiennes' eyes while he played Voldemort. That said, when he first takes on corporeal form at the end of Goblet of Fire, he does have reptilian slits for pupils, but they quickly take on a more human form. 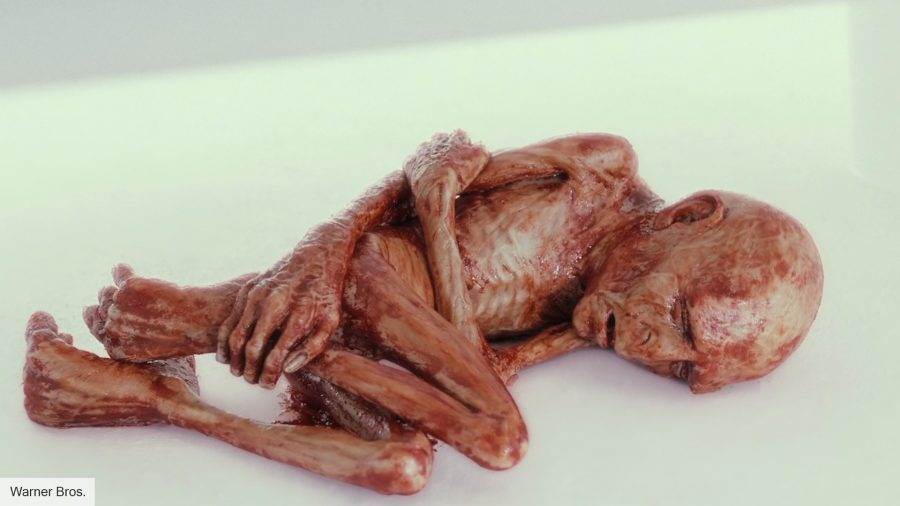 A FATE WORSE THAN DEATH

After his defeat at the end of The Deathly Hallows – Part 2, Voldemort didn't get to move on to the afterlife like other characters who died in Harry Potter. Ironically in his attempts to make himself immortal through his Horcruxes, Voldemort accidentally ensured he would never die, just not in the way he intended.

Remember that weird baby Voldemort Harry and Dumbeldore saw in the spiritual Kings Cross? Well, that's how Voldemort will spend the rest of eternity. He's trapped in Limbo, stuck in that raw stunted form forever, a fitting punishment for someone who attempted to pervert the natural course of life and death.